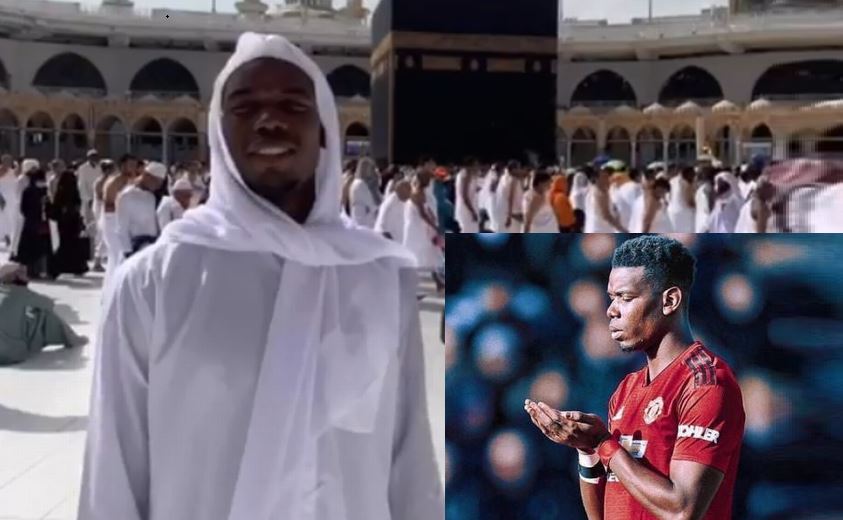 Man Utd midfielder Paul Pogba has revealed why he became a Muslim in his twenties.

According to Rahyafte (the missionaries and converts website):Manchester United midfielder Paul Pogba has opened up on his Islam faith saying that becoming a Muslim made him ‘better person’.

In an interview with British daily The Times’ Life Times, Pogba said he was not raised as a Muslim despite his mother practicing Islam.

He revealed that he started ‘questioning himself over a lot of things’ before turning to Islam and becoming ‘more peaceful inside’.

Pogba became interested in Islam after he decided to research the religion and follow a number of his friends by turning to the faith and the Man United midfielder credits the decision with helping to make him a better person.

Last month he was pictured along with Chelsea defender Kurt Zouma performing umrah pilgrimage to Mecca.

During an interview for The Times‘Life Times podcast, the 26 year old midfielder was asked what Islam meant to him, to which he said: “It’s everything. That’s what makes me thankful for everything.”

“It made me change, realise things in life. I guess, maybe, it makes me more peaceful inside. It was a good change in my life because I wasn’t born a Muslim, even if my mum was. I just grew up like that, respect for everyone,” he added.

When asked why he decided to become a Muslim now, the French footballer said: “It came because I have a lot of friends who are Muslim. We always talk.”

He further added: “I was questioning myself in a lot of things, then I started doing my own research. I prayed once with my friends and I felt something different. I felt really good.”

He also admitted he did so in order to help him focus.

“It’s really a religion that opened my mind and that makes me, maybe, a better person. You have a human relationship and respect you for who you are, what religion you are, what colour and everything. Islam is just this – respect towards humanity”.

Meanwhile, the 26-year-old midfielder is a summer target for Spanish giants Real Madrid, who are ready to pay £135million to sign the France World Cup winner but Man United boss Ole Gunnar Solskjaer has established that he will not sell him this summer.