An Introduction gives much attention to questions of universal values, Islam and democracy, gender issues, women’s rights and pluralism, while attempting to constrain the thinking of Jihadists and radical Islamism with liberal reformist voices within Islam. 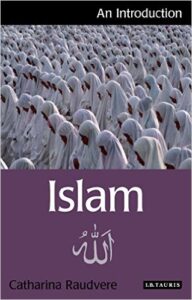 According to rahyafte (the missionaries and converts website):  Catharina Raudvere, a Professor of the History of Religions at the University of Copenhagen, gives the reader a basic outline of the religion. She provides a potted history of Islam’s emergence; she looks at the major texts; she discusses everything from shariah and Islamic festivals to everyday religiosity and political Islam; and she introduces various Islamic sects. The overarching theme, though, is that there is no such thing as a homogeneous, monolithic ‘Islam’. There are core texts and beliefs of course, which she discusses in some detail. But these are interpreted in multiple ways according to the context within which they are being read. 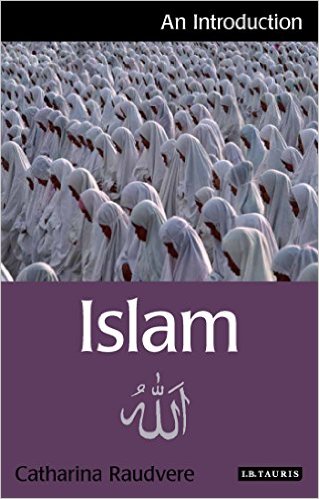 In her introduction, Professor Raudvere quotes the anthropologist Talal Asad: “If religious symbols are understood, on the analogy with words, as vehicles of meaning, can such meanings be established independently from the form of life in which they are used?” This rhetorical question gives us an idea of her theoretical approach. Religion, like words, can only be understood once placed in context. Words have no fixed meanings which remain the same regardless of the context within which they are used. Similarly, religious teachings and practices, signs and symbols have no meaning outside of the “form of life” in which they are employed. This means that you can’t explain, say, violence done in the name of Islam by referencing some monolithic Islam abstracted from its “form of life”(or, as Hirsi Ali puts it, its “social, economic, or political conditions”). To study the way religion is practiced, employed and utilised, in such a way that removes it from its worldly context, is pointless and Professor Raudvere certainly does not make this mistake.

The chapter entitled “Political Islam: Visions and Nightmares” is a good example of this method of understanding around the relationship between religious ideas and the material world. Rather than seeing political Islam, or Islamism, as the violent expression of Islam’s flawed nature, Professor Raudvere places it in its historical context. “The background to the formation of groups advocating Islamic alternatives to societal problems”, Professor Raudvere writes, “can be sought in the decline and fall of the Ottoman Empire and opposition to colonial rule.” She continues, “In the struggles against the colonial powers a split between secular nationalists and Islamists soon became apparent.” The former was a secular movement that emphasised large-scale, Western-inspired modernisation projects, while the latter looked to religion for inspiration and invoked the unity of Allah and the umma (the global Muslim nation or community).

In the post-World War II period many newly independent Muslim-majority countries pursued mass education campaigns, but they suffered from serious political and economic problems. This caused a backlash by many members of the recently educated middle class (doctors, lawyers, teachers etc.) who began to see Islam as “a platform for societal development.” This tendency was exacerbated by the failures of Arab nationalism. “The Islamic alternative in general looks to the reconstruction of a golden age”, writes Professor Raudvere, “And uses history as a mirror to define and suggest solutions to contemporary problems based on studies of the Qur’an and hadith reports.” This is in stark contrast “to visions for a good society built on human reasoning, as in the case for modernist ideologies such as liberalism or socialism, which dominated political debates during the nineteenth and twentieth centuries, not only in Europe and North America but also among the elites in the Muslim world.”

One issue that readers may have with Islam: An Introduction is that Professor Raudvere speeds through the sections on Islamist thinkers. We learn a little about Taqi al-Din Ahmad ibn Taymiyya (1263-1328) and Muhammad Ibn Abd al-Wahhab (1703-92) and the conservative Hanbali tradition that they both drew on to form ideas that would be picked up by later Islamists. We learn about Mawdudi and Jamaat-i Islami, al-Banna, Qutb and the Muslim Brotherhood, and a number of other figures. But it feels a bit rushed. One consequence of this is that she alludes to figures such as Muhammad Abduh, al-Afghani and Rashid Rida mentioning that they were al-Banna’s “intellectual predecessors” but we don’t learn much about them.

A more nuanced understanding of Islam is certainly needed in the English-speaking world and this book will contribute to that. Professor Raudvere’s focus on what she calls “everyday religiosity”, i.e. how the religion is actually practiced rather than how religious authorities say it should be practiced, is a particularly strong point about the text. It doesn’t read as fluently as you would hope an introduction to a topic of this complexity would. But it is still worth a read.