Hijab made me more firm in Islam, made my heart content and I felt in ease that I have covered myself and protected myself for Allah’s sake, and followed His commandments when he says to cover my blossom, surah an-Noor ayat 31, but I wanted to wear a niqab more. 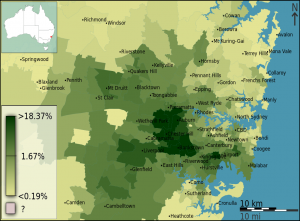 An Exclusive Interview with a Revert to Islam, Fatimah Dalgic, an Australian New Muslim, by  Bentolhoda Mofakhami

Would you please give us a biography of yourself!

Assalamu alaykum my name is Fatimah Dalgic. I live in Sydney Australia and I am 18 years old, I was born into a family whom practiced Roman Catholic, although they tried to make me practice such beliefs I never found peace within it but falsehood, and now it’s been 4 years since I’ve converted to Islam.

How did you become familiar with Islam?

I became familiar with Islam, through a friend of mine, I was at their home and I touched the Quran and read through it, at that time my heartfelt content and at Peace, I asked them “what this was?” they said “It was their Holy book.”, and explained to me that they were Muslims. 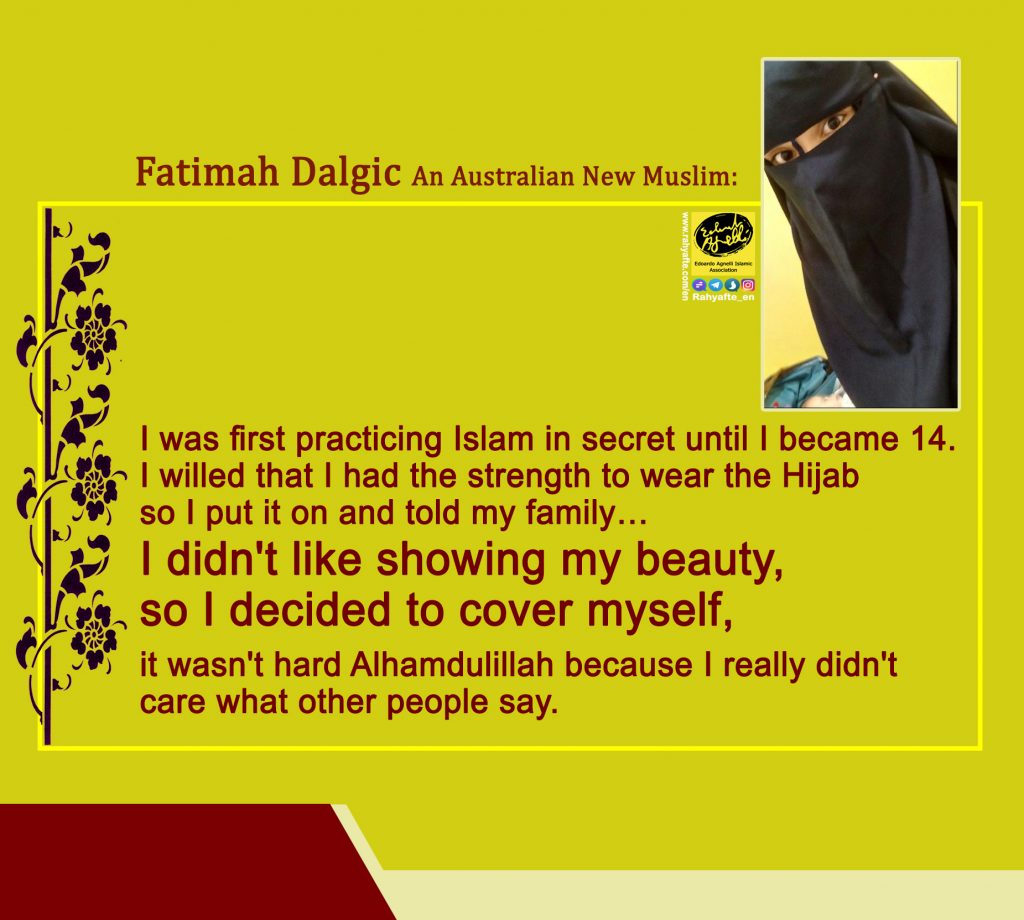 What was your family’s reaction after you became a Muslim? Did you have any problems with people who knew you? Are you married?

I was first practicing in secret until I became 14. I willed that I had the strength to wear the Hijab so I put it on and told my family, their reaction was not nice they wanted to walk distance to me and felt embarrassed that I became a Muslim, but after a while they got used to me and tried to accept because they realized I changed my behavior for the Good, when I was at the age of 16 I met my husband whom asked for my hand in marriage.

How do you see the spread of Islam in your country?

After I converted, I realized a lot of people especially my dear friends converted to Islam as well, Subhanallah Rabiyal Azeem. My heartfelt ease and content especially when I moved to Sydney to live with my husband.I found more ease that I found a lot of Muslims here.

What is the most beautiful Ayah of the Quran in your opinion? And why?

I would say Ayatul Kursi 2:255 due to its powerfulness and great meanings behind it.

What’s your opinion about hijab? Has wearing hijab had any negative effects on your private life? Do you think it is only dedicated to women?

I use to wear a hijab before I got married. Hijab made me more firm in Islam, made my heart content and I felt in ease that I have covered myself and protected myself for Allah’s sake, and followed His commandments when he says to cover my blossom, surah an-Noor ayat 31, but I wanted to wear a niqab more. I didn’t wear it until I got married.

A hijab is for women yet a man has his own hijab too, a women’s hijab covers her head to her toes a man is from the belly to his toes and both can’t wear tight or fashionable clothing that shows off and doesn’t define Islam and both are to lower their gaze. I defiantly define hijab is for both men and women

was wearing hijab hard for you? How did you convince yourself to wear a hijab while you have not had it before and your community does not believe in hijab?

I wanted to wear a Hijab after understanding a bit about it, I didn’t like showing my beauty, so I decided to cover myself, it wasn’t hard Alhamdulillah because I really didn’t care what other people say as it is my life and my decisions that don’t affect them.

How do you analyze the family institution according to Christianity and Islam?

The answer is that every family members have their rights and duty to perform in Islam and have to respect the eldest while the eldest must respect the youngest although Christianity families seem to be very different in the way they treat each other.

What specifically attracted you to Islam?

What attracted me to Islam is the rulings and the Qur’an shows truthfulness, logic, and purity.

Did your friends become Muslim after you?

Yea she did after me. She reverted this year.

Because I was in love with Fatimah Zahra (SA), the daughter of Rasulullah, and the wife of Ali (AS).

What was your feeling when you prayed for the first time? Wasn’t it hard for you to pray 5 times a day?

Subhanallah rabiyal Azeem, when I first prayed, I always kept prayed, it was so easy for me because I always felt happiness in salat

How do you analyze women’s right in Islam compared to what the West has propagated?

Women’s rights in Islam is similar to the rights of A man, Islam does not make a ruling on a women unless there is a similar ruling on a men, western country tries to spread Islam in a wrong way due to their fear that their people will change their minds to convert to Islam similarly to the times of Rasulullah (saw).

Which feature of Islam attracted you?

The features that attract me to Islam is the Quran, the beauty of peace that is in Islam and how much Allah opens the door for us and shows us evidence of everything.

How is your TV programs in your country? Is it good for the family?

And the programs here are not good same as American

As a convert, what way of inviting to Islam you believe is more effective on non-Muslims?

For a non-Muslim to understand Islam correctly, is to give dawah not by words but by actions by the appearance as well one must perform dawah similar to ways of Rasulullah (saw), so the hearts of the non-believer becomes inshallah soft and it makes it easy for one to speak, as well one must know and have firm evidence of what they are telling them.

If you want to say some words about the beauty of Islam, the peace, the calmness you have found in this religion what do you say?

Alhamdulillah Rabi Alamin what more can I say .

DUA: Allah! please accept this from us. You are All-Hearing and All-Knowing. You are The Most Forgiving. You are The Most Relenting and repeatedly Merciful. Allah! grant us The Taufiq to read all the 5 prayers with sincerity.
(Taken from  To Be Earnest In Prayers By Amina Elahi)