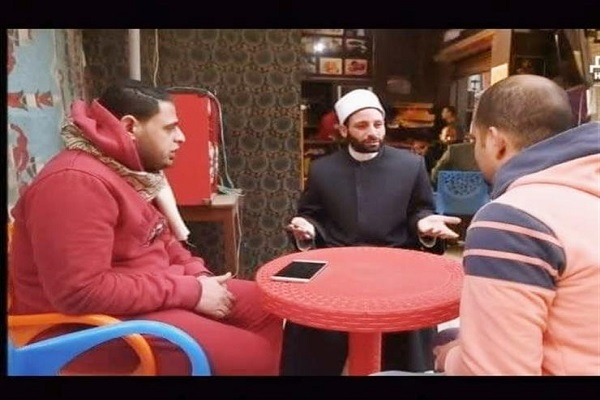 According to Rahyafte(the missionaries and converts website)According to the program, preachers affiliated with Al-Azhar sit with people in cafes and discuss religious, social, and cultural issues of the day, Skynews Arabic reported.

A photo that shows a preacher talking with two men in a café has been widely shared among Egyptian netizens in recent days.

Nazir Ayyad, an official with al-Azhar, said the program has proven its ability for positive interaction with the public as it clarifies concepts and prepares the ground for mutual and effective dialogue.

Ayyad also pointed to important directives that al-Azhar has issued for men and women preachers about the necessity to carry out field programs.

Accordingly, preachers go to cafes across Cairo while wearing their special attire and talk with people from different walks of life.

Also speaking to Skynews, Sheikh Ahmad Ramzi who is one of the preachers participating in the program, says the program seeks to confront extremism and deviant ideas through holding talks with people who do not attend mosques.