The first man who have flown like a bird on sky in his home-made aircraft during the Golden Age of Islam, 1000 years earlier than the Wright Brothers. 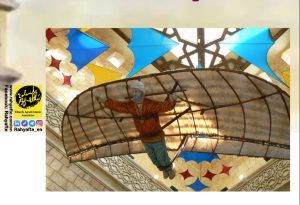 Although the Wright Brothers were invertors of the first practical fixed-wing and powered airplane, an idea of flying existed since the beginning of humanity. Humans dreamed to fly like a bird. Myths, legends and images of flying people are not seldom in human history. The oldest known depiction of human flight is dated between 2350-2150 BC. The 4 cm high clay seal from Sumerian civilization can be seen in the Museum of Ancient Antiques in the Pergamon Museum in Berlin. It reveals a 10 am wide clay relief showing the shepherd Etana riding an eagle.

In mythology of ancient civilizations, humans attributed the ability to fly to their deities, mythical figures and demons. The ability of the supreme beings expressed the dream, the trial and the urge of humans to fly themselves.

In order to fly, they needed wings. So humans over and over again tried to create wings like the wings of birds or insects. The man who gave us wings and was able to fly in his flying machine in the 9th century was Abbas Ibn Firnas, a Muslim scientist from Andalusia (Muslim Spain).

Abbas Abu Al-Qasim Ibn Firnas Ibn Wirdas Al-Takurini was born in 810 in a Spanish city today called Ronda. It was the time when the best engineers, architects and scientists of the world were all gathered at the leading universities and learning centres of Andalusia and significantly contributed to scientific development and the rise of European civilization. Ibn Firnas was one of them and devoted his entire life to science. He wrote several books on mathematics, physics, astronomy and engineering. He is the person who made a history of aviation as he made first controlled flight in human history. 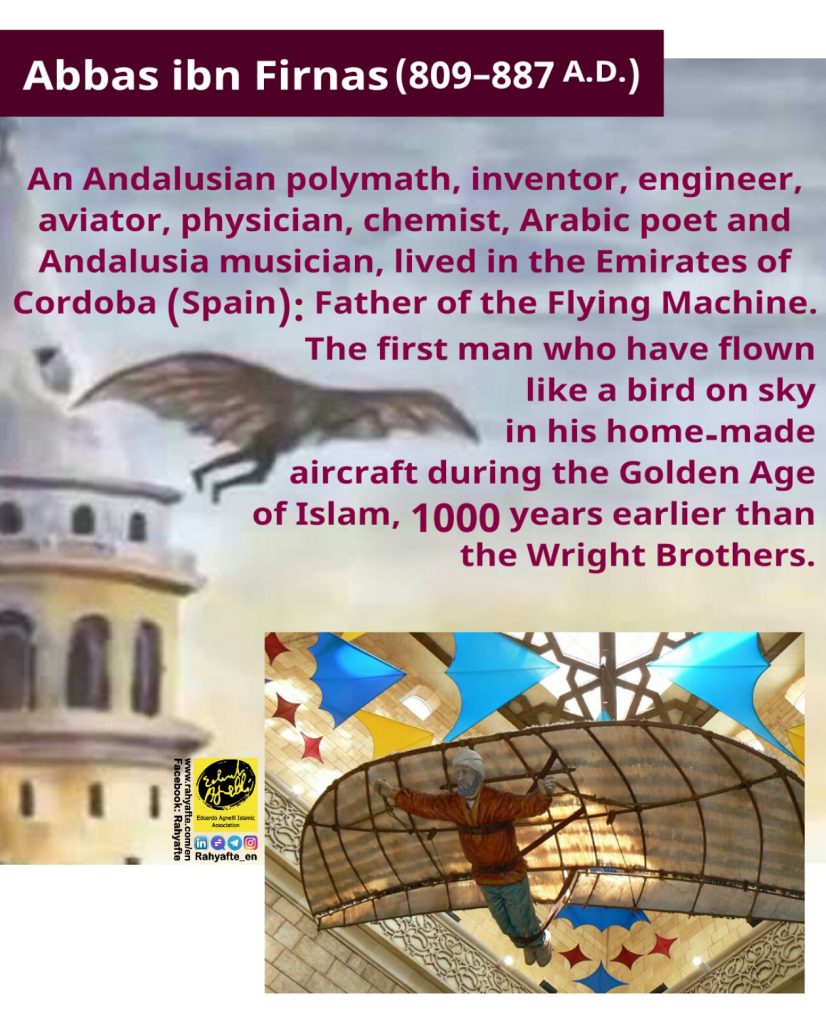 Abu al-Qasim Abbas ibn Firnas ibn Wirdas al-Takurini (809-887 A.D.), also known as Abbas ibn Firnas (Arabic: عباس بن فرناس‎), was an Andalusian polymath:
an inventor, physician, chemist, engineer, Andalusian musician, and Arabic-language poet. Of Berber descent, his name’s root is “Afernas”, which is fairly widespread today in Algeria. He was born in Izn-Rand Onda, Al-Andalus(today’s Ronda, Spain), lived in the Emirate of Córdoba, and is reputed to have attempted flight. The crater Ibn Firnas on the Moon is named in his honor, as well as the Ibn Firnas Airport in Baghdad and one of the bridges over the Guadalquivir river in Cordoba.

Abbas Ibn Firnas designed a water clock called al-Maqata, devised a means of manufacturing colorless glass, invented various glass planispheres, made corrective lenses (“reading stones”), devised a chain of rings that could be used to simulate the motions of the planets and stars, and developed a process for cutting rock crystal that allowed Spain to cease exporting quartz to Egypt to be cut.

Some seven centuries after the death of Firnas, the Algerian historian Ahmed Mohammed al-Maqqari (d. 1632) wrote a description of Firnas that included the following: Among other very curious experiments which he made, one is his trying to fly.

Construction of the Flying Machine

In order to obtain sufficient lift to support his weight, Abbas bin Firnas constructed wings with a span that is estimated between four and five meters. Striving to keep the flying machine strong and light enough, he manufactured a light wooden frame, probably using bamboo, which is hollow like the bones in a bird’s wing.

The parts of the frame were tied together with thin strips of silk, as this was the lightest and strongest material at the time. Silk was also used as the fabric covering of the wings. Finally, he covered the wings and his clothes with eagle feather. Abbas bin Firnas manufactured a harness system whereby he could be suspended under the flying machine and control the wing movements with the aid of handles attached to the wings.

Considering that Abbas bin Firnas was 70 years old at the time with the resultant physical limitations, the wing movements were probably limited. It is recorded that he took off from a hill and stayed airborne for some time which indicates that the flying machine had good gliding capabilities.

Upon landing, however, he damaged the wings and injured his back. This has been ascribed to the fact that the flying machine lacked a tail, which possibly limited his machine’s lateral control and body posture. With this flight, he launched himself into history.

He jumped from the Jabal Al-Arus Mountain. Before flying, he gave a speech to the large crowd gathered to observe this historical moment. Ibn Firnas said: “This moment, I shall say good bye to you all. I shall do so by moving my wings up and down, which should normally result in me flying like a bird. If everything goes well, I shall be able to fly back to you safely.”

He covered himself with feathers for the purpose, attached a couple of wings to his body, and, getting on an eminence, flung himself down into the air, when according to the testimony of several trustworthy writers who witnessed the performance, he flew a considerable distance, as if he had been a bird, but, in alighting again on the place whence he had started, his back was very much hurt, for not knowing that birds when they alight come down upon their tails, he forgot to provide himself with one.

Al-Maqqari is said to have used in his history works “many early sources no longer extant”, but in the case of Firnas, he does not cite his sources for the details of the reputed flight, though he does claim that one verse in a 9th-century Arab poem is actually an allusion to Firnas’s flight. The poem was written by Mu’min ibn Said, a court poet of Córdoba under Muhammad I (d. 886), who was acquainted with and usually critical of Ibn Firnas. The pertinent verse runs: “He flew faster than the phoenix in his flight when he dressed his body in the feathers of a vulture.” No other surviving sources refer to the event.

It has been suggested that Ibn Firnas’s attempt at glider flight might have inspired the attempt by Eilmer of Malmesbury between 1000 and 1010 in England, but there is no evidence supporting this hypothesis.

Ibn Firnas wrote a book to describe the details of his aircraft. This book, along with his other books, were destroyed when Muslims lost the rule in Spain. But the details of his aircraft design survived in later sources in Europe. His home-made aircraft undoubtedly been a great source of inspiration for later scientists including Leonardo Da Vinci. Amazingly, due to Ibn Firnas’s experiments, Da Vinci already knew that the tail was very important for a safe landing.

Armen Firman may be the Latinized name of Abbas Ibn Firnas.

According to some secondary sources, about 20 years before Ibn Firnas attempted to fly he may have witnessed Firman as he wrapped himself in a loose cloak stiffened with wooden struts and jumped from a tower in Córdoba, intending to use the garment as wings on which he could glide. The alleged attempt at flight was unsuccessful, but the garment slowed his fall enough that he only sustained minor injuries.

However, there is no reference to Armen Firman in other secondary sources, all of which deal exhaustively with Ibn Firnas’ flight attempt. Armen Firman is not mentioned in al-Maqqari’s account.

As this story was recorded only in a single primary source, al-Maqqari, and since Firman’s jump is said to have been Ibn Firnas’ source of inspiration, the lack of any mention of Firman in al-Maqqari’s account may point to synthesis, the tower jump later confused with Ibn Firnas’ gliding attempt in secondary writings.

Others who were inspired by Abbas bin Firnas’ example 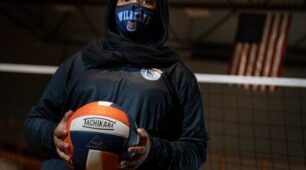 Muslim teen disqualified from volleyball match because of her hijab