After muslem’s migration to Medina ,  Prophet established a perfect sample of  Islamic society .One of the challenges against Prophet’s target were apparent enemies .But Prophet through revelation changed these threates to chance . By fighting in the way of Allah ( jihad ) crusaders will obtain victory or martyrdom … 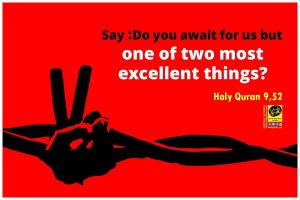 In the name of Allah

After muslem’s migration to Medina ,  Prophet established a perfect sample of  Islamic society .One of the challenges against Prophet’s target were apparent enemies .But Prophet through revelation changed these threates to chance . By fighting in the way of Allah ( jihad ) crusaders will obtain victory or martyrdom …

Encounters on the Battlefields

Islam was advancing rapidly but at the same time the idol-worshippers of Quraysh, as well as the Jewish tribes of the Hijaz, were unrestrained in their harassment of the Muslims. With the help of the hypocrites of Medina who were among the community of Muslims, they created new misfortunes for the Muslims every day until finally the matter led to war.

Many battles took place between the Muslims and the Arab polytheists and Jews, in most of which the Muslims were victorious.

There was altogether over eighty major and minor battles. In all the major conflicts such as the battles of Badr, Uhud, Khandaq, Khaybar, Hunayn, etc., the Prophet was personally present on the battle scene. Also in all the major battles and many minor ones, victory was gained especially through the efforts of ‘Alī bin Abi Tālib. He was the only person who never turned away from any of these battles.

In all the wars that occurred during the ten years after the migration from Mecca to Medina, less than two hundred Muslims and less than a thousand infidels were killed.

(A) The Battle of Badr

The Meccans continued their attempt to destroy Islam. They continued to harass the Muslims who remained in Mecca and also confiscated their property and belongings. Abu Jahl, the leader of the Meccans, even sent a letter to the Prophet threatening him of the attack by the Meccans. It was in response to such aggression that Allah gave the permission to fight the unbelievers of Mecca. He said, “Permission [for jihād] is granted to those who are being killed because they have been oppressed…those who have been expelled from their homes without a just cause…” (۲۲:۳۹-۴۰)

In the second year of the hijra, the Prophet with about 300 ill-equipped Muslims confronted a wellequipped Meccan force of 1000 soldiers. Though outnumbered, the Muslims were able to defeat the unbelievers in their first armed encounter with the enemy. 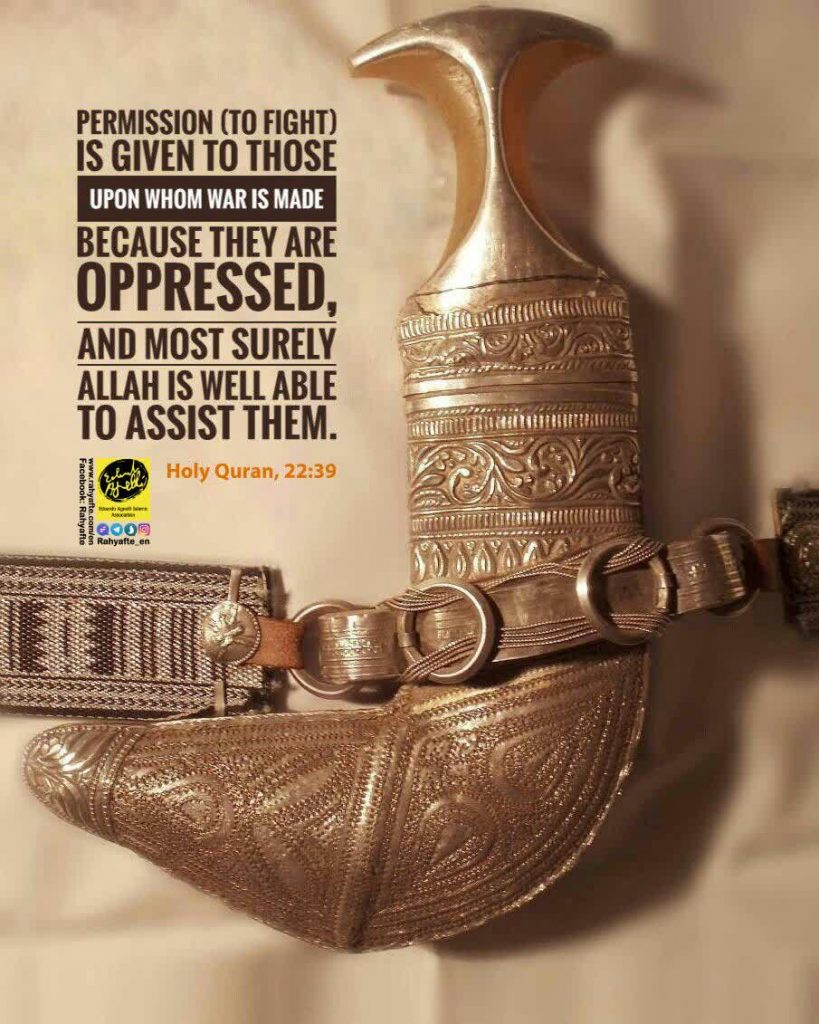 To avenge their defeat at Badr, the Meccans raised another force in the third year after hijra and marched towards Medina. After reaching the hills of Uhud, 4 m. outside Medina, the Prophet took up his position below the hill. The army arrayed in fighting formations. Fifty archers were posted, under the command of ‘Abdullah bin Jubayr, at a pass between the hills to guard the Muslims from any rear attack. They had strict orders not to leave their post, no matter what the outcome of the battle.

The Muslims initially defeated the Meccans. The enemy, having suffered a heavy loss, fell back in disorder and the Muslims started gathering booties. Thinking that the fight was over, most of the fifty archers guarding the hill passage left their posts against the orders of their commander.

Khālid bin Walīd, a commander of the Meccan forces, seized the opportunity and led his cavalry through the mountain pass and, after killing the few remaining archers, launched a furious attack upon the Muslims from the rear.

Because of the disobedience of a small group, the victory was taken away from the Muslims. Most fled from the battlefield. A few, especially ‘Alī, stood their ground and fought till the end. The Muslims finally retreated to the security of the heights of mount Uhud. Among the 70 Muslims who died in this counter attack of the kuffar was Hamzah bin ‘Abdul Muttalib, the courageous uncle of the Prophet. He was, indeed, the Lion of God (asdullāh).

(C) The Battle of Khandaq (Ahzab)

In the fifth year of the hijra, a Jewish tribe formed an alliance with the Meccans; and together they raised an army of 10,000 soldiers. It is known as Khandaq (i.e., ditch) because the Muslims had dug a ditch around their campsite to prevent the enemy from entering the city. The Allied forces of the non-Muslims besieged Medina for a month. Except for a few famous soldiers, they were unable to cross the ditch. The Allied forces finally retreated after ‘Alī, in a one-to-one encounter, killed the most courageous of their fighters.

In the sixth year of the hijra, the tribe of Bani Mustalaq violated the rights of the Muslims. As a result, they had to face the Muslim forces at a place called Maris’a and were defeated.

(F) The Battle of Khaybar

A large number of Jewish tribes had settled in Khaybar forts and the surrounding area of northern Arabia. They had close ties with the Meccans and had constantly threatened the Muslims. In the seventh year of hijra, the Prophet decided to face the enemy. The Muslims marched to Khaybar, put it under siege and, finally, gained victory after ‘Alī marched forward, conquered the main fort and killed the most brave of the Jewish soldiers.