I like an aya of Surah Baqarah that says “Oh you, who have believed. Seek help through patience and prayer…indeed Allah is with the patient.”

An Exclusive Interview of a Revert to Islam from Romania, Lady Diana, by Bentolhoda Mofakhami.

-Please give us a biography of yourself?

My name is Diana, 21 years old and I was born in a small village in Romania. I grew up as a Christian thinking that there are no other religions in the world. I grew up close-minded thinking you must do what others around you do. I used to go to church with my parents and brother.. and pray to God.

Then, as a teenager, I started to argue with my family because I didn’t like going to church, so they were forcing me to go. Until I became 16 or 17 and I said to them, I’m done. I’m not coming anymore. I used to believe in God, but I thought he doesn’t help me, so I stopped even praying. I was living for the Dunya, for impressing others, for doing crazy stuff.

-How did you get familiar with Islam?

My first contact with Islam was on a holiday but my real contact was in October 2016. I was learning a bit of Turkish at that time and the teacher was Muslim but none practicing, so at the end of the lesson he said something about how priests wear gold and dress fancy and imams’ dress in Islam is so simple. I was like a question mark; “Islam???” “Imam??”. I was living in a box, I knew nothing! 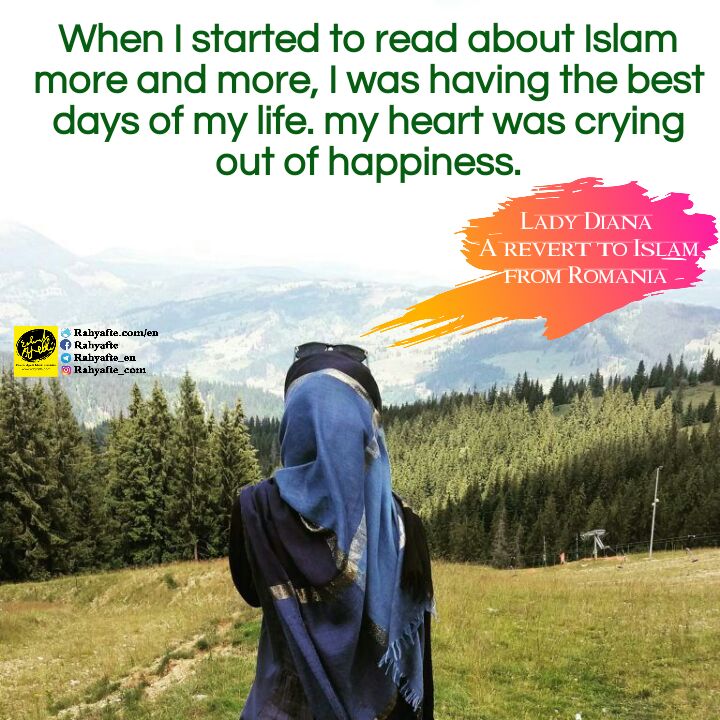 -What drove you to convert to Islam?

After that, I went home to research and I started to read and read…it was crazy SubhanAllah, I knew in my heart from the first moments that my life is going to change radically. I didn’t know yet I’m gonna revert.

Then, in 2 days I went to get some small books and in 2 more days, I was attending my first Jummuah. I was not a religious person at all at that point. I was suicidal, depressive, I hated life somehow. I was smoking a lot, drinking a lot, doing a lot of bad things.

Just to ignore the fact that something was missing in my life. If somebody would have told me I will become religious I would have called them crazy. I hated religion. But when I started to read about Islam, more and more… I was having the best days of my life… my heart was crying out of happiness.

Islam is the truth, is the true religion of God. And when I found Islam, I found out ” praise be to Allah”(1:1), I knew I found my reason to live. Allah saved my life!! Alhamdulillah! I took my  Shahada in 2 weeks! I knew nothing but I knew Islam is my religion.

-What was your family’s reaction after you became a Muslim? Did you have any problems with people who knew you? Are you married?

My family didn’t talk to me in the beginning. my mum especially. They hated it, they were scared. In my country, you know Islam equals to terrorism and that’s it. I understand them. they are living in a box just like I was. they don’t know other religions. I lost my best friends…most of them, I had a friend like my sister. She was looking at me like an alien. Everybody thought I have got some mental problems or something like that. My university colleagues as well were shocked. I got married last year but now I am not anymore, It was bad for my life and my faith…

-Do you have any friends that became Muslims because of you or after you?

-How do you see the spread of Islam in Romania?

Islam isn’t really well seen here. But people still find it in a way of another. But there is not a high rate of conversion or reversion.  Romania was communist before and some people are really close-minded, may God guide them all.

-What is the most beautiful Ayah of the Quran in your opinion? And why?

Every ayah in the Quran is so beautiful. I can’t say which is the most beautiful. I like an aya of Surah Baqarah that says “Oh you, who have believed. Seek help through patience and prayer…indeed Allah is with the patient.” Basically, sums up what faith is. Everything that happens in your life you only need patience and to pray. If you talk to God, everything will become easier.

-What’ your opinion about hijab? Did wearing hijab have any effect on your private life? Do you think it is only dedicated to women?

Hijab is mandatory in Islam, is what differentiates a non-believer from a believing woman. It helps avoid fitnah, avoid flirting or something like them. It protects the women and it makes you see somebody for her personality, not only for her appearance.

Yes, I chose wearing hijab from the first week as a Muslim and it helped me quit my bad addictions, it keeps reminding me of my new identity and I feel beautiful obeying Him (Allah).

Hijab is also for men, Hijab is the practice of dressing modestly ( which apply to men as well) but   we have also the hijab of the tongue so you don’t speak bad words, and the hijab of the eyes so you lower your gaze and so on.

-Wasn’t it hard for you to wear hijab because you didn’t have it before?

It was in the beginning. But I felt so happy with it after that.

-How do you analyze the family institution according to Christianity and Islam?

I won’t lie, I didn’t study Christianity much. In fact, I study it more now. The Bible may say about the family life but most of the Christians don’t live up to the Bible anymore. There are some but not many. In the Islamic view, I can tell, the family institution is considered as a sacred place, and is important to protect your family life, and you should have the best manners with your spouse and kids.

-What specifically attracted you to Islam?

Well, the fact that is the true religion from God (Allah). No more kissing a picture of Jesus or his mother Mary. No more photos in the church, (I was Christian orthodox) and no more mixed gathering at church and women not being dressed properly. I liked that it was clear. You obey one God, you pray to Him only. Everything made sense. Everything was so logical.

-What was your religion before converting to Islam?

As I said, I was Christian orthodox

-What was your feeling when you prayed for the first time? Wasn’t it hard for you to pray 5 times a day?

Praying for the first time. It seems hard, I didn’t know Arabic. I was just following tutorials. but it felt like home; the more you increase in faith, the more you find comfort bowing to Him. It seemed hard in the beginning. Ipray at university, at my jobs. Alhamdulillah. Then I started to add to it. Not only the compulsory prayers. But It was always a pleasure to pray to Allah.

-If you want to say some words about the beauty of Islam, the peace, the calmness you have found in this religion what do you say?

Islam is the peace that entered my world and my heart when I only had chaos in my heart. Islam is what every heart craves .All the pleasures in this temporary world can’t bring in your heart what Islam brings. Whatever happens to me, I’m grateful. I know, it is a blessing from my Lord Subhanallah (Glory to Him)

-How do you analyze women’s right in Islam compared to what the West has propagated?

The west is propagating undressed women and women who sleep with anybody, flirt with anybody and so on. People are free mixing without any shame. They cheat and do so many wrong things. Islam is protecting the woman by asking her to cover and to avoid looking at the opposite gender too much or free mixing. It avoids temptations as they always exist in the West.

-which feature in Islam attracted you?

-Who/ what influenced your conversion to Islam?

Just Allah put in my heart love for Islam. I converted fast so I can start from day 0.I was ashamed of myself and I was feeling dirty.

-As a convert, what way of inviting to Islam do you believe is more effective on non-Muslims?

Your manners, definitely. Let people see the love in your eyes when you talk about your religion. Be kind, polite. Help others. Also, explain to them. People need facts. They don’t believe without evidence. You need to study Islam well before explaining to others. There is no place for confusion in Islam.

Thank you for this opportunity to speak. May God bless you all