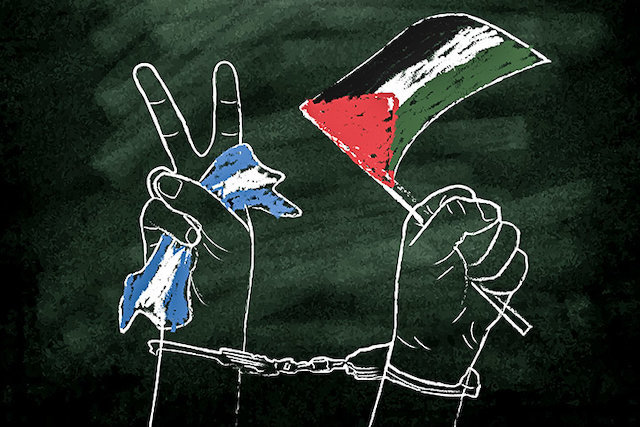 “I invite Muslims all over the globe to consecrate the last Friday of the holy month of Ramadan as ‘Quds Day’ and to proclaim the international solidarity of Muslims in support of the legitimate rights of the Muslim people of Palestine.” – Ayatollah Khomeini August 1979

In 1979 Al-Quds International Day was founded by the Ayatollah Khomeini to mark the injustices being inflicted daily upon the Palestinian people by their Israeli oppressors and occupiers:

“I invite Muslims all over the globe to consecrate the last Friday of the holy month of Ramadan as ‘Quds Day’ and to proclaim the international solidarity of Muslims in support of the legitimate rights of the Muslim people of Palestine.“ – Ayatollah Khomeini August 1979

Since then the day has come to symbolize the united global struggle against oppression and tyranny worldwide, with the decades long, Palestinian battle for recognition and freedom from brutal Israeli apartheid, central to that struggle.

The passion and commitment to Al Quds day have radiated out to encompass all peoples being preyed upon by the unholy alliance of western supremacism, Saudi terrorism and Israeli expansionism.

The one obstacle to the US/Saudi/Israeli hegemonic triad is unity, unity of human beings from all nations, faiths and cultures who have decided that enough is enough and who have decided to raise their voices against the paradigm of global ethnic cleansing and plundering of resources from sovereign nations.

Unity is the nemesis of the beast of neocolonialism. All efforts are being made by the US, Saudi Arabia and Israel to prevent the coming together of powerful and opposing nations. Nations that threaten the security of the despotic states of Saudi Arabia and Israel, primary terrorism producers in the region. The hands reaching out across the borders of Iraq and Syria, joining in solidarity against the common enemies in the cradle of civilization, are being deliberately targeted by the US coalition. Three times the US coalition has targeted the Syrian Arab Army and its allies in Al Tanf, close to the border with Iraq.

Syria has long expressed that the freedom of Palestine is central to its core ideology and culture. The battles we see smoldering across the region are the refusal to capitulate to the Israeli desire to see Palestine erased from our maps and our memories.

As Dr. Bouthaina Shaaban, political and media advisor to the Syrian President, Bashar Al-Assad, expressed, a few days after the US bombed Syrian forces and allies, for the third time in Al Tanf:

“The plans that others put in place are gradual and at each stage we will see different developments and targeting and different alignments, but the only long-term goal is to turn these Arabs against each other and to drain their capabilities and energies into a rabble controlled by the Israeli empire.”

In Yemen, a Saudi genocidal war of aggression has been raging for more than 800 days. A war fuelled, endorsed and promoted by the US, UK, France, Israel and the UN. A war based upon entirely illegitimate premises that have no basis in international law. A war that is decimating a historically poverty-stricken nation already brought to its economical knees by a corrupt and cancerous Saudi proxy colonialism.

The people of Yemen, despite the Saudi bombs, including cluster bombs supplied by the US that are used to target some of the poorest and most isolated civilian areas of Yemen, still take to the streets to march for Palestine’s freedom. They still believe that Palestine’s liberty from Israeli illegal occupation is pivotal to the freedom of all nations. In the midst of war, starvation, sickness and disease these people raise the flag of freedom in defiance of the death that hovers overhead in the skies of Yemen.

“Day after day, the Yemeni people reveals its determination to defend its independence and its principles, and its rejection of any surrender facing the US-Saudi aggression, whatever the sacrifices. Yemen seems clearly moving into the way of the Lebanese Islamic Resistance, both in terms of its unwavering commitment to the Palestinian cause as by its historic victories – past and future.

“Similarly, the Arab-Muslim public opinion is awakening more and more to the reality of the Takfiri project in the region and to the collusion of the forces of imperialism, and the smoke screen that covered the true identity of Saudi Arabia, adorned with its deceptive title of the cradle of Islam and guarantor of its holy places, is irremediably fading away. The Saudi aura can only diminish in the future, while the Resistance Axis’ cannot but grow.” ~ Sayed Hasan

The same tentacles of terrorism now wrap themselves around London, Manchester, Paris, Brussels and threaten all of Europe. Terrorism midwifed in Saudi Arabia before being exported worldwide and supported by the UK, French and US regimes, among many others. The same terrorism that struck in Tehran, the same that strikes every day in Syria, Yemen, Iraq, Afghanistan, Philippines and in every nation that is targeted for its refusal to bow down to US-led geopolitical exceptionalism.

Al Quds day reminds us of the multi-layered, multi-million-dollar, state-sponsored, marketing, media and NGO complex being constructed to absorb and de-claw our resistance against injustice and global incitement to hatred, xenophobia, racism and totalitarianism.

Al Quds day gives us the opportunity to reflect upon the Palestinian struggle for the most basic of human rights in their own homeland, stolen from them by the Zionist entity, supported by its allies in Washington, London and Paris.

“Al-Quds Day is a brilliant example of solidarity in the face of unparalleled oppression. Al Quds Day is a tribute to unity and solidarity. Al Quds Day speaks not only of Palestine but of all injustices.” ~ Ali Mallah, activist for human rights, Canada

On the 14th of June 2017, Grenfell Tower in London was transformed into a towering inferno claiming the lives of 79 people according to recent statistics, with residents demanding to know where the missing 538 victims are that are not being identified by authorities. As reports emerge from this tragedy, it is coming to light that the communities of Grenfell Tower were marginalized and discriminated against. Al Quds day reminds us that the lives lost in the flames of greed and opportunism must be honored by our continuing to fight for justice and equality for all peoples in all nations. We owe it to the suffering of all the world’s “non-people” to ensure history remembers their names.