Allah guided me from darkness to light 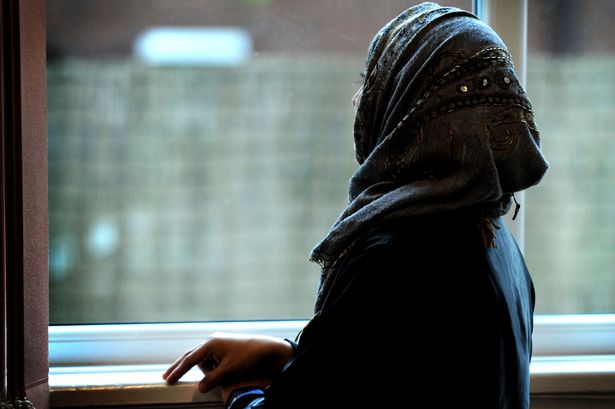 We were taught to believe that for every crime committed towards the Greeks, Islam was responsible. The Turks were Muslims and their crimes were reflecting their religious beliefs. This was actually a very wise plan of the Greek Orthodox Church (religion and politics in Greece are the same thing) to build hatred in the hearts of the Greeks against Islam, in order to protect their religion and prevent people from converting to Islam.

I was born in Athens, Greece, to Greek Orthodox parents. My father’s family lived in Turkey, Istanbul for most of their lives, and my father was born and raised there. They were wealthy, well–educated, and as most Christian Orthodox who lived in an Islamic country, they held on to their religion.

A time came when the Turkish government decided to kick the majority of Greek citizens out of Turkey and confiscate their wealth, houses, and businesses. So my father’s family had to return back to Greece empty-handed. This is what the Turkish Muslims did to them, and this validated, according to them, their hatred towards Islam.

My mother’s family was living on a Greek island just on the border between Greece and Turkey. During a Turkish attack, the Turks occupied the island, burnt their houses, and in order to survive, they escaped to the Greek mainland. Even more reason to hate the Turkish Muslims then!

Greece was for more than 400 years occupied by Turks, and we were taught to believe that for every crime committed towards the Greeks, Islam was responsible. The Turks were Muslims and their crimes were reflecting their religious beliefs.

This was actually a very wise plan of the Greek Orthodox Church (religion and politics in Greece are the same thing) to build hatred in the hearts of the Greeks against Islam, in order to protect their religion and prevent people from converting to Islam.

So for hundreds of years we were taught in our history and religious books to hate and make fun of the Islamic religion.

In our books, Islam was actually not a religion and Muhammad (peace be upon him) was not a prophet! He was just a very intelligent leader and politician who gathered rules and laws from the Jews and the Christians, added some of his own ideas and conquered the world.

At school, we were taught to make fun of him and of his wives or his Companions. All the “caricatures” and slander against him which are published today by the media were actually part of our lessons and our exams! 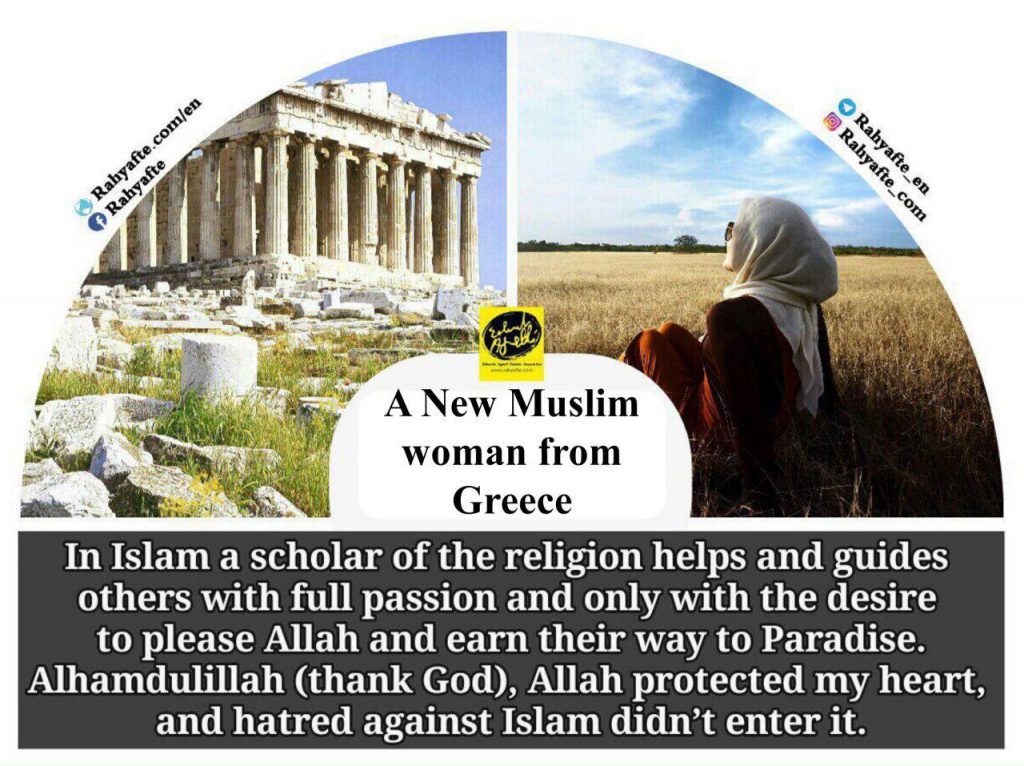 Other Greeks have also succeeded to rid themselves of the burden of the Orthodox religious inheritance placed on their shoulders and they have opened, by the will of Allah, their eyes, ears, and hearts to see that Islam is a true religion sent by Allah, and Muhammad is a true prophet, and the seal of all prophets.

Muslims believe that Allah sent messengers to mankind as a guidance to them, starting from Adam, Noah, Abraham, Ismael, Isaac, Moses, and Jesus (peace be upon them all). But Allah’s final message was revealed to the Prophet Muhammad (peace be upon him).

It was a great help to me that both of my parents were not very religious themselves. They rarely practiced their religion and used to take me to church only during weddings or funerals.

What drove my father away from his religion was the corruption he was seeing daily among the priests.

How could these people preach for God and goodness, and at the same time steal from the church’s funds, buy villas, and own Mercedes cars, and spread homosexuality amongst them? Are these the righteous representatives of the religion who will guide us, correct us, and lead us closer to God? He was fed up with them and this led him to become an atheist.

The churches lost most of their followers, at least in my country, because of their actions. In Islam, a scholar of the religion helps and guides others with full passion and only with the desire to please Allah and earn their way to Paradise.

In Christianity to become a priest is a profitable occupation. This corruption “within” drives many young people away from the religion they were born with and leads them to search for something else.

As a teenager I loved to read a lot and I wasn’t really satisfied or convinced with Christianity. I had belief in God, fear, and love for Him, but everything else confused me.

I started searching around but I never searched towards Islam (maybe due to the background I had against it).

So alhamdulillah He had mercy on my soul and guided me from darkness to light, from Hell to Paradise God willing.

He brought into my life my husband, a born Muslim, planted the seed of love into our hearts and led us to marriage without us really paying attention to the religious differences. 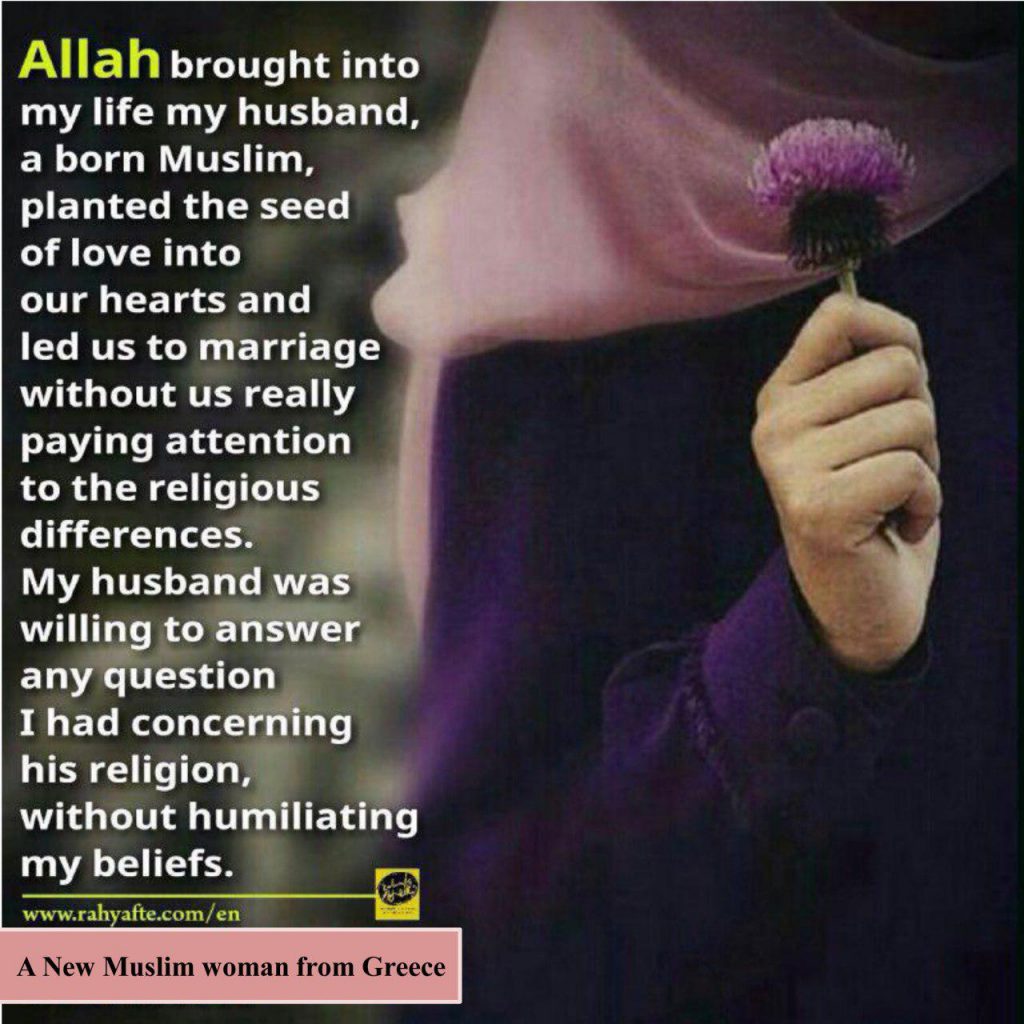 My husband was willing to answer any question I had concerning his religion, without humiliating my beliefs (no matter how wrong they were) and without ever putting any pressure on me or even asking me to change my religion.

After 3 years of being married, having the chance to know more about Islam and to read the noble Quran, as well as other religious books, I was convinced that there is no such a thing as a trinity, nor was Jesus God.

Muslims believe in One, Unique, Incomparable God, Who has no son, nor partner, and that none has the right to be worshiped but Him alone! No one shares His divinity, nor His attributes.

The religion of Islam is the acceptance of and obedience to the teachings of Allah which were revealed to His final Prophet Muhammad.

I became a Muslim, keeping it secret from my family and friends for many years. We lived in Greece trying to practice Islam, but it was extremely difficult, almost impossible.

In my home town there are no mosques, no access to Islamic studies, no people praying, or fasting, or women wearing hijab.

There are only some Muslim immigrants who came to Greece for a better financial future and who let the Western lifestyle attract them and eventually corrupt them. As a result, they do not follow their religion and they are completely lost.

It was incredibly difficult to perform our Islamic duties, especially for me, as I wasn’t born as a Muslim, and didn’t have an Islamic education.

My husband and I had to pray and fast with the use of calendars, no Adhan in our ears, and no Muslim community to support us. We felt that with each passing day we were stepping backwards. Our faith was decreasing and the wave was taking us.

So when my daughter was born, we decided, in order to save our own souls and our daughter’s, if God wills, we have to migrate to an Islamic country. We didn’t want to raise her in a western open environment where she would struggle to maintain her identity and might end up lost.

Thanks to Allah, He has guided us and gave us the chance to migrate to an Islamic country, where we can hear the sweet words of the Adhan, and we can increase our knowledge and love for Him, and our beloved Prophet Muhammad.