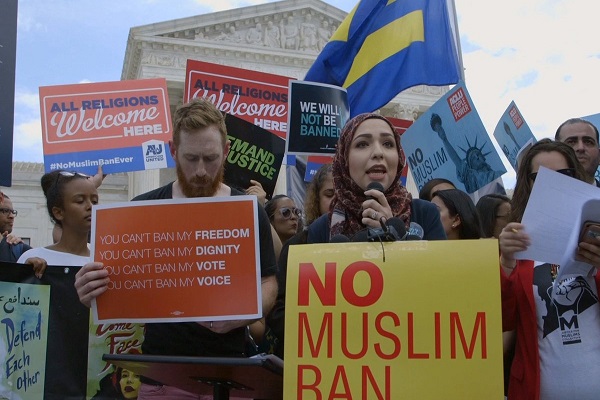 Former US president Trump signed an executive order he labeled “Protecting the Nation From Foreign Terrorist Entry Into the United States” five years ago this month, on Jan. 27, 2017.

According to Rahyafte(the missionaries and converts website)Known as the “Muslim ban,” the order – with its misspellings and misstatements of facts and law – was enacted under Section 212(f) of the Immigration and Nationality Act (INA), which essentially gives a president unilateral authority to ban certain classes of foreign nationals. The Muslim ban triggered global outrage as thousands of Americans rushed to the airports to support international travelers. Democrats, including then-candidate Joe Biden, urged limits on the president’s power to unilaterally enact travel bans.

Fast forward five years, and even though the Muslim ban is no more, the basis for it – Section 212(f) – remains unchecked. Like his predecessor, Biden has leaned in on using Section 212(f) to enact his own travel bans with minimal checks or consultation with Congress.

Originally enacted in 1952, Section 212(f) provides the president with authority to suspend from entry “any aliens or of any class of aliens into the United States” whose entry would be “detrimental to the interests of the United States.” As potent and open-ended as the statute is, few presidents bothered using Section 212(f) until President Trump. Referring to Section 212(f) as his “magical authority” to restrict immigration, Trump turned to it in the first week of his presidency to institute the Muslim ban that he had promised as a candidate. Although lower courts rejected the Muslim ban as discriminatory, the Supreme Court upheld the ban in Trump v. Hawaii.

That decision predictably emboldened the Trump administration, which expanded the ban to 13 countries total, including more Muslim-majority countries, and targeted particularly large numbers of African and brown immigrants. Trump would use Section 212(f) to ban refugees and asylum seekers, Chinese students and researchers, and to ban immigrants based on health care status and their alleged harm to the US economy.

In response to Trump’s frequent use of Section 212(f), Democrats drafted the National Origin-Based Anti-discrimination for Non-immigrants (NO BAN) Act to bar a president from unilaterally banning entry of immigrants. The bill would amend Section 212(f) to restrict travel bans to those supported only by credible facts, are of a defined duration and are necessary to address specific acts that threaten the safety of the American public.

Critically, under the NO BAN framework, a ban may be used only if less severe policy options would not work, and if it is crafted to affect no more people than is essential to accomplish its purpose. Under the bill, the president also would have to first consult with Congress then deliver a follow-up report within 48 hours or the ban would expire.

Biden not only backed the NO BAN Act, he included language limiting presidential authority in the comprehensive immigration reform bill he introduced on his first day in office. Yet as soon as the Democrats took power and when faced with using Section 212(f) within the confines of the NO BAN Act, the White House opted to implement its travel bans in the same manner as President Trump. Indeed, on Biden’s first day in office, he extended the travel ban imposed by Trump against 27 European Union countries and Great Britain that Trump actually attempted to end.

Just a month ago, despite international protests, Biden implemented a ban on eight southern African countries without much in the way of consultation with Congress. All of this of course after then-candidate Biden criticized Trump-era travel bans against Europeans and Africans in 2020 as counterproductive and unnecessary.

Biden does not need to wait on Congress to limit his authority. He can do so now, and there’s no better time to start than on the fifth anniversary of the Muslim ban. Biden sympathizers may argue that unlike Donald Trump, we can trust him to use travel ban authority fairly, sparingly and based on science. But presidential authority is not about the president you trust today, but rather about the future president you will not trust tomorrow. Whether it be over social media checks, the Muslim Ban, family separation, the border wall or “extreme vetting,” many of Trump’s immigration policies had foundation in programs from his predecessors.

In terms of the most recent bans adopted by Biden, scientists were far more split on their effectiveness. The omicron variant, for example, may well have been circulating in Europe even before South Africa identified it. And given the surging cases of omicron in the United States, we can certainly say the Southern Africa travel ban did nothing more than alienate our allies while scoring a few political points with the public.

Finally, Biden supporters may suddenly view such bans in the same manner Trump did: as effective tools to respond to rapidly changing situations such as a pandemic. Yet rather than inhibiting effective crisis management, adoption of the NO BAN Act would help the president. Instead of taking knee-jerk reactions not rooted in sound science, this president, or any president, would have to essentially “show their work.” That is, they would need to demonstrate to Congress and the public that the ban really is necessary and that no other options are available.

Members of Congress, both Democrats and Republicans, should be clamoring to rein in executive power as the first step in reestablishing some semblance of checks and balances in the relationship between Congress and the White House. What is the point of electing a member of Congress or even having a Congress if they merely serve as a rubber stamp or opponent to whoever is in the White House?

As we look back on the Muslim ban from five years ago, the best way we can remember and honor its victims is to ensure that no president, irrespective of party, has unchecked power in the form of an immigration provision. Democrats have a short window to limit the use of Section 212(f). Come November 2022, it’s likely that Republicans will win back the House and do all in their power to ensure the return of Donald Trump come 2024. It is the time to restrict Section 212(f) before it’s too late.