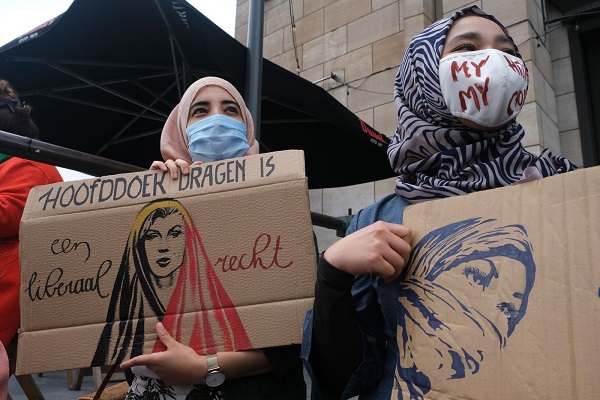 Muslim women in Belgium no longer have to take off their headscarves in the courtroom as the corresponding article of the law was overturned on Monday, media reports said.

In 2018, a Muslim woman took her case to the European Court of Human Rights (ECtHR) after she was denied access to a court hearing – because she was wearing a headscarf.

The ECtHR had condemned Belgium for banning the headscarf and ruled that the practice violated religious freedom. However, Belgium kept the headscarf law.

In this regard, the Interfederal Center for Equal Opportunities applied in March 2019 to the Committee of Ministers of the Council of Europe, which monitors compliance with ECtHR judgments, to indicate that Article 759 of the judicial code would need to be amended so that such a ban could be lifted. Amendments have been made to the Law on the Constitution of Courts.

Earlier in 2019, the ECtHR ruled by a majority of six votes to one “that there had been a violation of Article 9 (freedom of thought, conscience and religion) of the European Convention on Human Rights.” According to the court’s ruling, excluding Muslim women “from the courtroom on the grounds that she had refused to remove her headscarf had amounted to a ‘restriction’ on the exercise of her right to manifest her religion.”

“The Court therefore held that the need for the restriction in question had not been established and that the infringement of Mrs Lachiri’s right to freedom to manifest her religion was not justified in a democratic society,” read the ruling. The court ordered Belgium to pay Lachiri 1,000 euros (about $1,650).

In 2007, the applicant, referred to by the European Council court as “Mrs Lachiri,” was attending a court hearing in a case concerning the death of her brother. The presiding judge of the court told Lachiri “that she could not enter the hearing room unless she removed her headscarf.” She refused to comply and did not attend the hearing. Lachiri challenged the decision in local courts before lodging a complaint at the top EU court in December 2008.

Belgium has always been embroiled in anti-Muslim discussions due to its large Muslim population. For the rest of Europe, reports show that anti-Muslim and racist attacks have been on the rise. The influx of refugees into European countries has led to the rise of populist anti-immigration political movements, thereby leading Europe’s right-wing populists to score election successes from Italy to Sweden and from Austria to Hungary.