Why did Imam Hassan (A.S) sign peace treaty with Muawiyah? 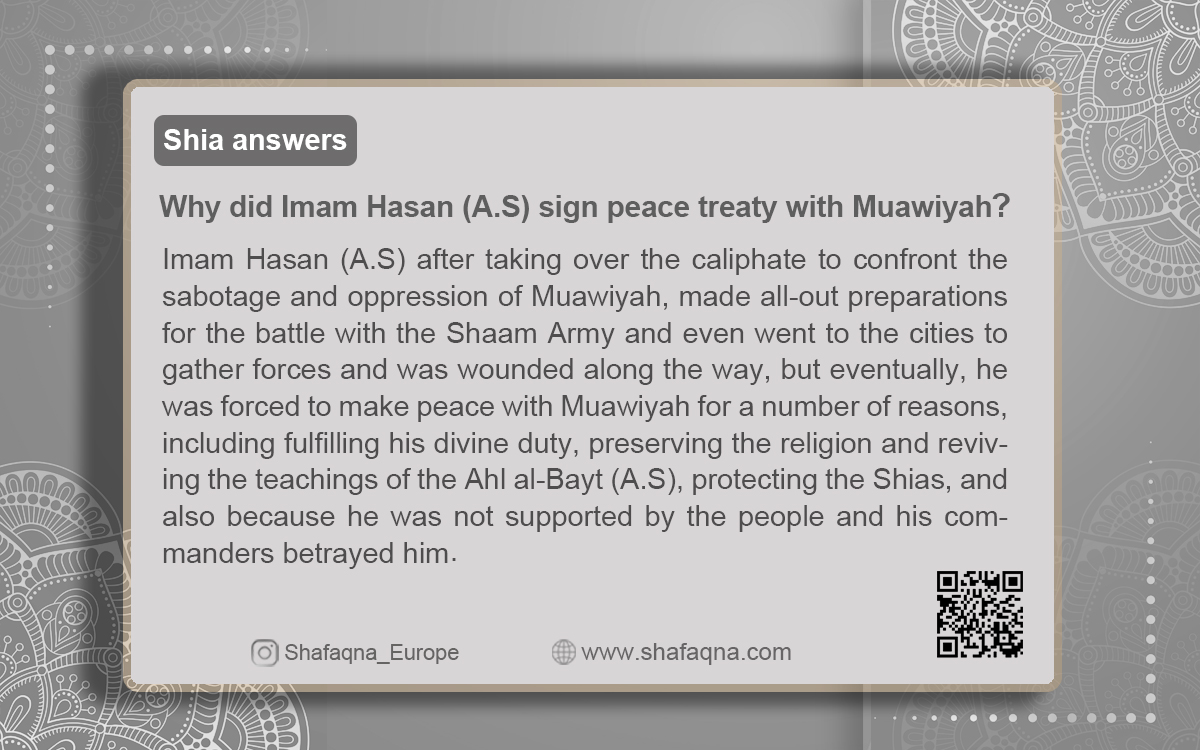 Imam Hassan’s (A.S) peace treaty is the most heroic agreement in history, which was created according to the time and place conditions of that period, and was the best choice to preserve Islam and Shias at that time.

According to rahyafte (the missionaries and converts website): Imam Hassan (A.S) after taking over the caliphate to confront the sabotage and oppression of Muawiyah, made all-out preparations for the battle with the Shaam Army and even went to the cities to gather forces and was wounded along the way, but eventually, he was forced to make peace with Muawiyah for a number of reasons, including fulfilling his divine duty, preserving the religion and reviving the teachings of the Ahlul-Bayt (A.S), protecting the Shias, and also because he was not supported by the people and his commanders betrayed him.

In the divine government, in political equations and relations the criterion is the interest of Islam and Muslims and the adoption of anything that preserves and strengthens the religion; Whether it is war or peace, whether it is negotiation or confrontation. Therefore, in the political life of the Messenger of God (PBUH) there have been many peace and many wars. There has been both mercy and intense action against the opposition. The Ahlul-Bayt (A.S) have also had different positions and policies according to the prevailing social and political time and conditions, and the interests of Islam and Muslims.

Imam Hassan (A.S) after taking over the caliphate to confront the sabotage and oppression of Muawiyah, made all-out preparations for the battle with the Shaam Army and even went to the cities to gather forces and was wounded along the way, but eventually, he was forced to make peace with Muawiyah for the following reasons:

According to a narration from Imam Sadiq (A.S), the duty of each of the Ahlul-Bayt (A.S), including Imam Hassan’s (A.S) peace treaty with Muawiyah, was revealed to the Holy Prophet through Gabriel. If the reason for the peace of Imam Hassan (A.S) is to fulfill the divine duty; That is, God has assigned such a duty to that Imam (AS), so there is no doubt about his peace. Sheikh Saduq narrated from Abu Sa’id that he said: “When I went to Imam Hassan (A.S), I said to him: You son of the prophet! Why did you accept peace with the cruel and corrupt Muawiyah despite the fact that you already knew you were right?!” The Imam said: “O’ Abu Sa’id! Am I not God’s authority over God’s creation and their Imam after my father?” I said: “Yes!” Imam Hassan (A.S) said:

“So I am now an Imam and a leader, whether I rise or not. O’ Abu Sa’id! The reason of my peace with “Muawiyah”, is the same as the reason of Prophet [PBUH]’s peace with Bani Zamrah and Bani Ashja’ and people of Mecca when he was returning from Hudaybiyyah. O Abu Sa’id! When I am an Imam from God Almighty, I cannot be held accountable for what I have done, whether war or peace; Although the secret of what I have done is not clear to others. Did you not see Khidr (A.S) that when he killed that boy for drilling a ship, Musa (A.S) objected to his work? Because he did not know the secret; But when he understood the reason, he was satisfied, and my work is the same, because you do not know the secret, you have targeted me to protest…”

Preserving the religion and reviving the teachings of the Ahlul-Bayt (A.S) is the most central duty of religious leaders. For this reason, their formation of government, uprising, peace and silence are all done in order to preserve Islam and revive the tradition. If in some circumstances Islam is maintained by uprising, they will rise, and if at another point their silence leads to the preservation of Islam, they will remain silent, even though this silence will cause them to lose their inalienable right. Imam Ali (A.S) said:

“The health of religion is more dear to us than anything.”

Therefore, war could jeopardize the principle of religion in the circumstances when Imam Hassan’s (A.S) army was unprepared and the possibility of an attack by Eastern Rome was high. As Imam Hassan (A.S) said:

“I was afraid Muslims be eradicated and no one remained. Therefore, I consented to peace in order to save God’s religion.”

Most of the special Shias who supported the Amir al-Mu’minin (A.S) were martyred in Jaml, Safin and Nahrwan battles, and a small group of them remained, and if a war broke out, given the weakness of the Iraqi people, Imam Hasan (A.S) and the Shias would certainly suffer irreparable damages, because Muawiyah would have severely repressed them in this case. If the Imam did not compromise and the result of the war was the victory of the Shaam, Muawiyah would not have left even one of them under the pretext of war. But peace protected the Shias from being killed. Therefore, Imam Hassan (A.S) considered the protection of the Shias as one of the causes of his peace and said:

“The maintenance and protection of the Shias forced me to make peace, then I decided that the war should be postponed to another day …”

4. Lack of support from the people and betrayal of commanders

Undoubtedly, one of the main reasons for the peace of Imam Hassan (A.S) was that the people did not support him. If the people of Kufa had supported him and the commanders of his army had not betrayed him, he would not have made peace; As he said:

“I swear by God, I handed the caliphate on to Muawiyah on account that I did not have enough companions to fight with him. If I had some, I would fight with him day and night until God rules between us.”

As a result, Imam Hassan (A.S) did not accept peace for fear of death and the spirit of compromise, as he himself said:

“I am the son of the bravest Arab man, and Fatimah (SA), the master of women in the world, gave birth to me, should I be afraid of anyone?! …”

Imam Hassan’s (A.S) peace treaty is the most heroic agreement in history, which was created according to the time and place conditions of that period, and was the best choice to preserve Islam and Shias at that time.

*The series of articles “Shia answers” has been prepared and compiled by the Shafaqna International News Agency in order to provide short and simple answers to common questions about Islam and Shiism in different parts of the world. Answering these questions are done in collaboration with researchers and Islamic centers and based on online and library resources. 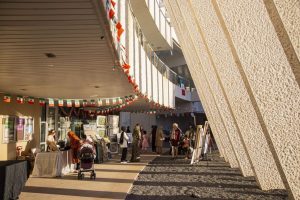