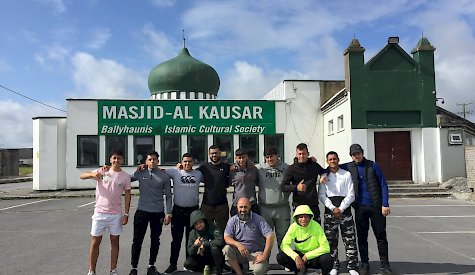 In this way, the Muslims of Ireland were untypical of other European countries, which recruited manual workers from their former colonies or affiliates: the Indian subcontinent for Britain, or North Africa for France, and Turkey in the case of Germany.

According to rahyafte (the missionaries and converts website):   by Dr Chris Hewer* : The College of Surgeons in Dublin has long been recognised as giving a world class postgraduate education to medics from many countries. It was this reputation that drew Muslims to Ireland to study in the 1950s. These students formed themselves into the Dublin Islamic Society in 1959, so that they could support one another and find places to pray and celebrate their major festivals. This society later became the Islamic Foundation of Ireland, which was able to purchase a house in south-central Dublin in 1976 through the generosity of the King of Saudi Arabia; this was their meeting place until the purchase of a former church on the South Circular Road in 1983.

From 1981 onwards, a religious leader or imam was sponsored by another Arab state, which continues to give some support to maintain this position. The Islamic Foundation established itself as the principal sponsor of Muslim affairs in the country dealing with the interface between Muslims and public life. This can be seen, by way of example, in that the imam of the Foundation is the Patron of the Muslim National Schools. Membership of the Islamic Foundation is open to all Muslims in Ireland and the Registered Members, reportedly numbering some 1400 today, elect the management committee.

This helps us to see the way in which Muslim institutions work. There is no equivalent to a church structure or bishops; each Mosque is independent and governed by its own membership and management. From 1976 onwards, the College of Surgeons led the way in sending out representatives to attract postgraduate students from the Gulf States, Malaysia and South Africa. This helps us to understand why some 4,000 Muslims in Ireland today are medical doctors.

The pattern of Muslims coming to Ireland to study was repeated in various university cities around the country with Muslim centres being opened in Galway around 1980, Cork in 1984, Limerick in 1994 and Waterford in 1999. Many of these students returned to their sending countries on completion of their studies but others remained in Ireland, settled and established their families there. This gave to the Muslim community of these early decades a professional, educated, middle-class character.

In this way, the Muslims of Ireland were untypical of other European countries, which recruited manual workers from their former colonies or affiliates: the Indian subcontinent for Britain, or North Africa for France, and Turkey in the case of Germany. This led to Muslim communities in such countries having a different social profile and it is only the second and third generations that are proportionally represented in higher education. The Irish social profile is more like that of North American Muslims.

The exception to this rule was the Mosque at Ballyhaunis, County Mayo, which was opened in 1986 and was the first purpose-built Mosque in Ireland. This was built by the owner of an abattoir and processing factory producing Halal meat mainly for the export market, to provide for the needs of his Muslim employees and their families. It has a capacity of around 150 and continues to operate today, even though the factory has changed hands. The scripture of Islam, the Qur’an, forbids Muslims to eat pork.

Permitted animals, for example, sheep, have to be killed according to Muslim practice. They must be properly tended before slaughter, none must witness the death of another, God must be invoked before the life is taken and then the animal must be killed as quickly and painlessly as possible by one swift cut to the throat severing blood vessels and the wind-pipe. This is often referred to as Halal slaughter, although the word Halal has the wider meaning of something that is permitted or approved of in Islamic practice. 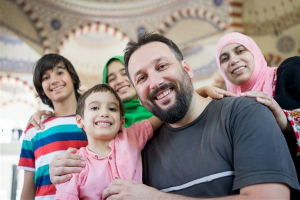