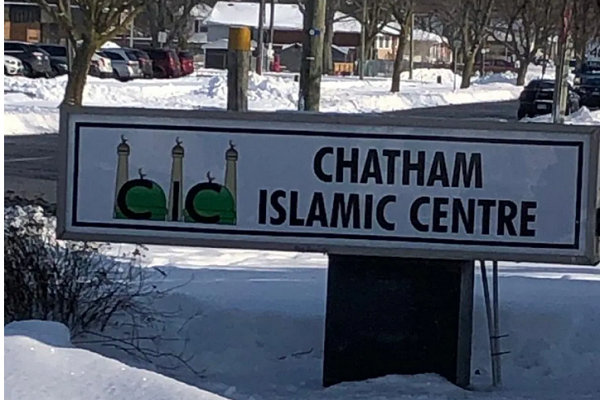 Chatham Islamic Centre in Ontario, Canada, opened a new building in the former St. James Presbyterian Church this month where local Muslims can gather, pray and learn together.

According to rahyafte (the missionaries and converts website):  It became increasingly important for the growing Muslim community in Chatham to have a place of their own, says Amir Naveed, the president of Chatham Islamic Centre.

He and other members of the group spent the last several years renting gymnasiums and rooms in schools, which they found challenging, especially since spaces were tight.

“You can fit only maybe five people,” he said.

So, in 2019, they started looking for a permanent place to host gatherings.

Naveed said the community has been buzzing with excitement about the new building and the new activities that are planned. Many have donated and expressed their interest in investing and building up the community.

Since moving to Chatham from the Greater Toronto Area in 2010, he said he’s seen the local Muslim population grow from dozens to hundreds, adding that it became more pressing to find a space for them.

“We’ve had a Muslim presence in Chatham for a long time. And they were doing an amazing job working with the interfaith [groups] like [in] soup kitchens and all kinds of interfaith activities,” Naveed said, adding that a lack of a Muslim-specific facility posed challenges for young families.

“They were moving because they were not finding any place [in Chatham] … some of our very close family friends actually moved back to Toronto because [Chatham didn’t] have anything for the whole family,” he explained.

Naveed says the new building is significant because it enables the community to thrive and pass on its teachings to the younger generation.

“It’s not just a building. It is the whole concept because the whole Muslim culture, Muslim society is based on how you should know your neighbor. You should know who is coming for prayer. It’s not just like you come pray and then go home. You want them to sit down … in the mosque and have a chat,” he explained.

Rizwan Khan, a longtime Chatham resident and member of the group, said he’s proud to be part of the community and thankful for their financial support.

“Thank God for giving us this opportunity. Everybody in the community is excited and especially with desperate times,” he said, adding that they couldn’t hold an open house due to the pandemic.

“We cannot do all the stuff that normally would be used to do when we have a new place. We are trying our best to limit the number of people coming in,” he said, adding that the center is currently only open for prayers and they’re following the provincial COVID-19 protocols.

Transition from church to Islamic center

Despite the building being a former church, there wasn’t much to change to cater to the Muslim community, Khan and Naveed say.

They’re working with members of the former church to return and replace any data-x-items left behind.

“There are some things that we discussed with the previous group about anything they can take from here when the transition [happens] because we respect the sentimental values as well,” Khan said.

“Whatever we could hand over, we did hand over to them. Some of the literature and books, we have already shared with them … and there are some symbols that definitely we can work with the community members and see how we can try to arrange to replace them,” he continued.

Khan and Naveed say they look forward to the different activities and initiatives the center has planned, including parenting services and arranging a women’s only gym, as suggested by Naveed’s daughters.

“I haven’t seen our whole community [this] excited,” Naveed said. ” Everyone wants to come … we are very, very excited.”