Chronicles of the Martyrdom of Imam Hussein (AS)’ English Translation Unveiled 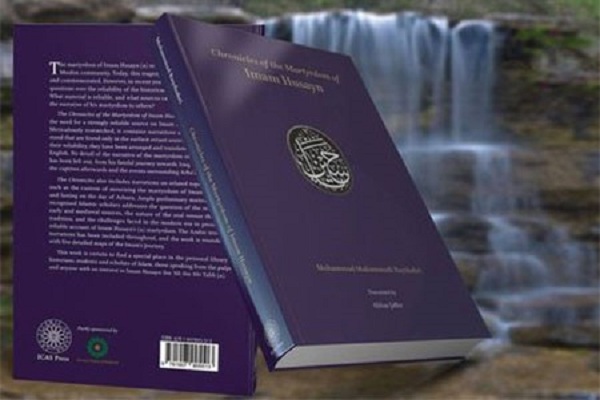 The English translation of a book titled “The Chronicles of the Martyrdom of Imam Hussein (AS)” was launched last week at the Islamic College in London.

According to rahyafte (the missionaries and converts website): The book, written by Ayatollah Mohammad Mohammadi Reyshahri, has been rendered into English by Abbas Jaffer.

It has been described as a comprehensive, reliable, narration-based account of the 680 AD Battle of Karbala.

This book is a translation of the Shahadat Namih‑yi Imam Hussein (AS), an abridged edition of a multiple award-winning encyclopedia on the Imam’s life.

The English version has been published in 1050 pages.

It was compiled to fill the need for a strongly reliable source on Imam Hussein’s (AS) final days. Meticulously researched, it contains narrations about the Imam’s last stand that are found only in the earliest extant sources. Hand-selected for their reliability, they have been arranged and translated into fluid, precise English. No detail of the narrative of the martyrdom of Imam Hussein (AS) has been left out, from his fateful journey towards Iraq, to the journey of the captives afterwards and the events surrounding Arbaeen.

The Chronicles also includes narrations on related topics of interest, such as the custom of mourning the martyrdom of Imam Hussein (AS) and fasting on the day of Ashura. Ample preliminary matter written by recognized Islamic scholars addresses the question of the reliability of early and medieval sources, the nature of the oral versus the written tradition, and the challenges faced in the modern era in presenting a reliable account of Imam Hussein’s (AS) martyrdom. The Arabic text of the narrations has been included throughout, and the work is rounded out with five detailed maps of the Imam’s journey.