Ballandalus
Last Will and Testament of Imam Ali ibn Abi Talib (d. 661)
ballandalus
۵ years ago
The 21st of Ramadan in the Islamic calendar marks the anniversary of the martyrdom of Imam ‘Alī b. Abī Ṭālib (r. 656–۶۶۱), the fourth rightly-guided caliph in the Sunni tradition and the first divinely-guided Imam of the Age and Successor of the Prophet in the Shi’i tradition. Like the two preceding caliphs, ‘Umar b. al-Khaṭṭāb (r. 634–۶۴۴) and ‘Uthmān b. ‘Affān (r. 644–۶۵۶), Imam ‘Alī was killed by an assassin’s blade. In this case, the assassin, ‘Abd al-Raḥmān ibn Muljam (d. 661), was a member of the Kharijite sect whose grievances against ‘Alī were colored by his own theology as well as the fact that his father, brothers and fellow Kharijites had been killed at the Battle of Nahrawan (658) by the caliph’s army. As a result, Ibn Muljam took it upon himself to assassinate the caliph, which he did by striking Imam ‘Alī with a poisoned blade to the back of the head while he was leading dawn prayers in the Great Mosque of Kufa. The caliph died of his injuries two days later. The following is his last will and testament (addressed to his two eldest sons, al-Ḥasan and al-Ḥusayn) as preserved in Nahj al-Balāghah, Imam ‘Alī’s collection of letters, sermons and decrees that was compiled by al-Sharīf al-Raḍī (d. 1015) in the 10th century.

I advise you to fear God, and not to pursue this vicious world even though it may try to entice you. Do not seek it though it may seek you and do not grieve over and long for things which this world refuses you. Always speak the truth, and work constantly for the eternal reward and blessings of God. Be an enemy of tyrants and oppressors and be a friend and support of those who are oppressed. To you, to my other children, to my relatives and to all who receive these words of mine, I advise to fear God and to be pious, to have fair and honest dealings with one another and improve mutual relations because I have heard your grandfather, the Prophet Muhammad (may the peace and blessings of God be upon him and his family) often say: “To remove mutual enmity, ill-feeling and hatred among people is better than all the prayers and fasting of many years.” 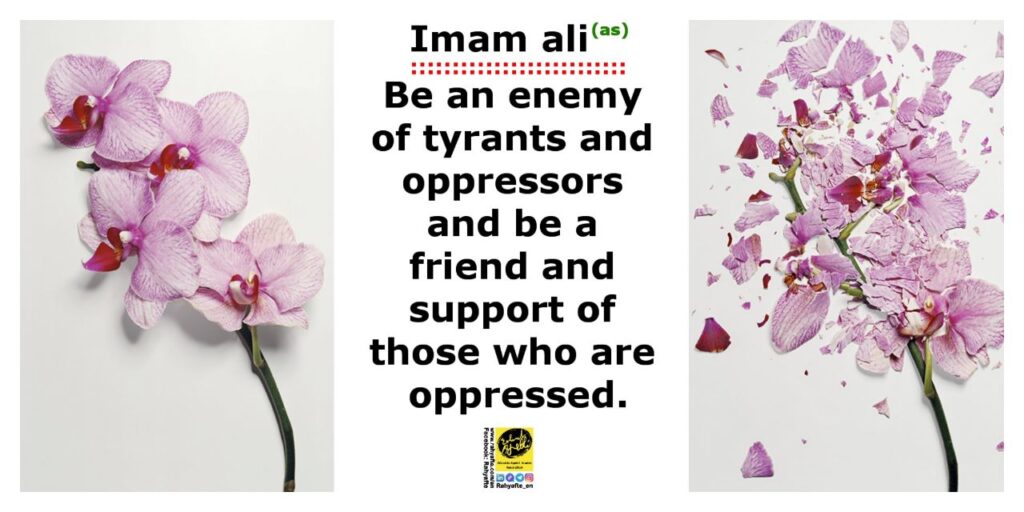 Fear God when the question of helpless orphans arises. You should not let them be full some time and hungry some other times. So long as you are there to guard and protect them, they should not be ruined or lost. Fear God with respect to your neighbors, for your prophet constantly enjoined us to be good to the neighbor, so much so that we thought that he may even decree that they had the right to inherit from us. Fear God in respect of the Holy Qur’an, lest others should excel and surpass you in following its tenets and in acting according to its orders. Fear God so far as prayers are concerned because prayers are the pillars of your religion.

Fear God in the matter of His House (Ka’bah). Let it not be deserted because if it is deserted, you (the Muslims) will be troubled with chastisement. Fear God in the matter of struggle in the path of God with your properties, lives, and tongues. Develop mutual liking, friendship and love and help one another. Take care that you do not spurn and treat one another badly and unsympathetically. Exhort people to do good and abstain them from evil, otherwise the vicious and the wicked will be your overlord and if you willingly allow such persons to be your rulers then your prayers will not be heard by God. O sons of ‘Abd al-Muṭṭalib: Let there be no retaliation for the act of my murder, except against the individual who committed the act. Do not seek vengeance against the community of Muslims under the slogan “The Commander of the Faithful has been murdered” nor inflict any harm on anyone, save my murderer. If I should die because of his strike against me, then strike him with a sword a single time, as he did to me. Do not mutilate or torture the man, for I have heard the Prophet of God (may the peace and blessings of God be upon him and his family) say: “Never mutilate or torture any 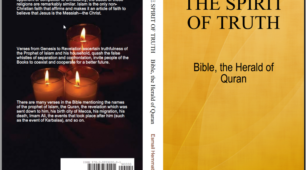